Day of Battle
The Middle Ages 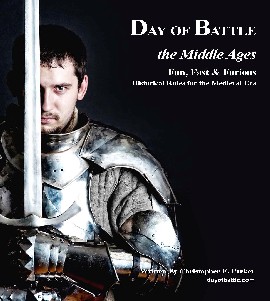 Greetings, my lords and ladies, you are indeed most welcome to the world of Day of Battle. The rulebook that you hold is a miniatures game set during the feudal and medieval periods. You and one or more friends gather round a table covered with miniature soldiers, dice and scenery and take on the roles Warlords. Each of you will try to complete your Warlord's goals, gather honor and attempt to avoid being captured or worse, killed.

Day of Battle presents action in a way that is both comprehensible and enjoyable, permitting you to act and react to your opponent. The majority of battles in this period involved a few thousand men per side. Most of these were fought for personal reasons. Some points of the battlefield are perceived as active, and other parts just seem to stand still. This can be a difficult concept for the historical wargamer to handle, as we want to employ all of our troops for maximum impact at all times. As you learn to manipulate the time and scale interaction of the game, you will become more and more daunting an opponent to face on the "day of battle." As you learn the tactics of the times you will gain more victories which in turn will increase your social standing (rank) which will allow you to raise larger and stronger armies.

The game mechanisms in Day of Battle are designed to give a game that has the feeling of the period, not just the battle. Like most published games of the past and present, Day of Battle can be played as standalone game where players setup a game, have a great time and then pack up and move on. To gamers just starting out in the hobby this is great, but it isn't too long before they yearn for a campaign. In a campaign game you can truly prove who you are and how good you can be. Ah, but campaigns can be a black hole. Once you are sucked in there may be no way out and for many reasons the campaign fizzles and ends usually leaving you frustrated und feeling unfulfilled.

Day of Battle attempts to satisfy the desire to play in a campaign but does it in an easy and enjoyable way. As mentioned earlier, you are a general referred to as a Warlord. Borrowing from our role-play cousins, your Warlord has a number of skills and attributes that make him who he is on the battlefield. During the actual battle you acquire something called honor points whenever you perform actions appropriate to your Warlord. At the end of the battle, win or lose, you total up your honor points and turn them into skill points. As these accumulate, you spend them on more skills and attributes to make your Warlord more powerful. Gain enough points and you have a chance to climb the social ladder and become a high-ranking noble.

Each battle you play is based on the social rank of your Warlord. The higher the social rank, the bigger and better the army your Warlord is going to summon. In a campaign, the better your army, the better your chances of winning. This campaign system is unique in that it doesn't require a map, an umpire, or even other players. The fog of war in the game system is so good that you can play a game against yourself and not know which side will win, and if both survive then both will win. You would truly have to cheat to trick the game. Mind you, it is always more enjoyable playing with other gamers. I run a campaign with six different Warlords that I have created and play them randomly against each other. When friends come over to play, I have control one of my Warlords. Games between Warlords just starting out their career are over in an hour or so, which allows for multiple games in one sitting.

The army creation system called 'The Domain' is based on a loose interpretation of the history of times but designed to be fast, fun and unpredictable. A Warlord and army can be created on paper with a deck of playing cards and a handful of six sided dice in 10 minutes time. There is little math involved and unlike most point system games, you have very little control over your army. The size of your army is based on the social rank of your Warlord and the units that arrive at the "summons" are based loosely on the army you are playing and a little luck. You draw playing cards to determine how many units arrive and roll dice to determine what troop type they are. You can promote some of your units and the number of promotions available is based on your social rank. With this unknown in mind, retainer units must be chosen wisely -- and then go hire some mercenaries!

Battle Line: A battle line must begin with at least 3 units, a banner and either a Warlord or a Leader.
Big "1": When a 1 is rolled in combat it is re-rolled for a second 1.
Camp: An area on the battlefield 6" square.
Campaign Imitative: Determines Attacker/Defender for the first turn.
Challenges: Personalities within close proximity and sight of one another may attempt personal combat with each other.
Charge Move: One basic move.
Common Retainers: Allow 1 re-roll or redraw of a card or may give a command.
Light Cover: -1d6 in combat.
Esteem: Rates the personality's standing among his peers.
Foot Troops: Pikemen, spearmen and infantry.
Formed Troops: Close and loose order troops.
Heavy Cover: Limits combat dice to 2d6.
Household: The Warlords social rank and esteem added.
Honor Points: Allow Warlords to improve themselves by acting according to their motivation.
Line Of Sight: 360 degrees around.
Morale Grade: Poor, Average, Veteran, Elite.
Motivation: Chivalric, Raider or Mercenary. Warlords gain the most honor points when performing actions that match motivation.
Mounted Troops: Knights, cavalry and skirmish cavalry.
Pavise: Gives a defender heavy armor if attacked from the front.
Personal Skills: Initiative, combat, morale, personal combat.
Proximity Movement

Regroup: To remove hits from a unit.
Reorder: Disorganized units must be reordered to be in Good Order.
Randomizer Card: Black adds; red subtract the number shown. Ace = 3, Face = 2, Numbered = 1, Joker = 3.
Retire Move: A half move to the rear opted by a unit when it takes a strike.
Retreat Move: A full move to the rear opted by a unit when it takes 2 strikes. Counts as two retires.
Shield Wall: Formation allowed to Infantry and dismounted knights when indicated on their Doman.
Social Rank: New Warlords begin as a Baron, SR3.
Sphere Of Influence: Opposing units may not come within 1" of one another except when in melee.
Supporting Unit: A close or loose order unit within 2" of a friendly unit that in melee.
Stakes & Pits: Disorder a unit attacking across it.
Troop Quality: Trained. All others are not.
Unformed Troops: Skirmishers.
Unit: A group of four stands grouped together to form a unit of like troops.
Wading In: When units are within 3" of one another they do not need orders to charge. Such a charge may be in any direction.
Weapon of Choice: In melee one weapon system usually prevails and gains a combat bonus of a higher strike number.

Chris Parker runs a website for DoB: www.dayofbattle.com
This site includes a link to the DoB forum.

Great set of medieval rules allows you to field medieval armies as a great warlord. Choose your style of play via your warlord type (Raider, Mercenary, or Chivalric) and the clever honor mechanism rewards your actions -- and punishes your failures -- in every battle. The higher the honor, the more capable and prestigious your leader. Makes for a great campaign-style series of battles every time you play a one-off game.

Order Day of Battle from On Military Matters