Mons: The Retreat to Victory 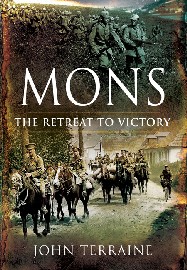 The Battle of Mons takes its place in the history of the British army beside Corunna and Dunkirk. Initially, all three were defeats, saved from disaster by the courage of the soldiers and the skill of some of the commanders in the field, and paving the way to great feats of arms and final success. In the context of the whole of the First World War, Mons was a small scale affair; comparatively short in duration, involving divisions rather than armies, and resulting in casualties that were light indeed by the standard of later battles of attrition. But, especially from the British viewpoint, its importance was crucial, partly because it was the first time for close on a hundred years that a British Army had been engaged in warfare on the continent of Europe, and partly because that army passed straight form the dejection of defeat to the exhilaration of the Battle of the Marne - one of the decisive battles of the War.