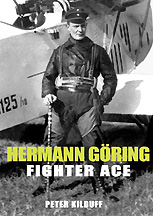 Hermann Goring - Fighter Ace is the first in-depth look at Goring's role as a military flyer and air combat leader from 1914 through the end of The Great War, and how those experiences shaped the personality that came to the world's attention in 1939.

At the outset of the First World War, Goring was eager to prove his value to his fatherland in initial skirmishes with French troops. When struck by severe rheumatoid arthritis in September 1914, the twenty-one-year-old officer's burning ambition and ego could not tolerate being sidelined and the following month he forced himself out of a sick bed to begin a new career as an aviation observer.

Goring went on to become a fighter pilot with twenty-two downed enemy aircraft to his credit, the last wartime commander of the Red Baron's own fighter wing, Jagdgeschwader Richthofen, and recipient of a row of prestigious medals including Prussia's highest bravery award, the Pour le Merite.