EMPIRES IN THE MOUNTAINS: French and Indian War Campaigns and Forts in the Lake Champlain, Lake George, and Husdon River Corridor 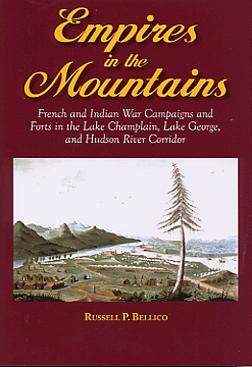 The French and Indian War (1754-1763), the North American theater of the Seven Years' War, would change the map of the continent and set the stage for the American Revolution. The conflict, which pitted the French and their Indian allies against the English, has often been misunderstood and largely received minor treatment in most general histories of America. To some, the name of the war itself has been puzzling and somewhat misleading because Britain also had Indian allies during the war.

The war represented a culmination of a century-old struggle for control of North America. The clash was inevitable. English settlers increasingly pushed westward and northward from their original settlements on the east coast, displacing the French and Native Americans. The French population in North America, approximately 55,000 by the middle of the eighteenth century, lived principally along the St. Lawrence River; but New France claimed a vast amount of territory to the west, linked by a string of isolated trading posts and forts.

In contrast, the population of the English colonies had expanded from a quarter million inhabitants in 1700 to 1.2 million by 1750. English land companies soon began to encroach on territories claimed by the French. To defend their land holdings, the French built a series of substantial fortifications on the strategic water routes of their empire, including along the Richelieu River-Lake Champlain corridor. 150 illustrations.