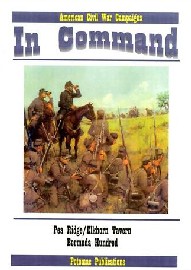 by Anderson, George and Toews, Ryan

20-page A4 paperback booklet. Unlike the other books in the Potomac Publications series this booklet does not provide details of individual battles but gives an umpire's guide to conducting two campaigns within the American Civil War: Pea Ridge/Elkhorn Tavern and Bermuda Hundred.

For each campaign the background is given, followed by an historical chronology. More detailed information is then given on terrain, movement rates, weather, and the armies involved. This includes notes on the personalities of the commanders and other characters allowing for a certain amount of roleplaying when conducting the campaign. Extensive umpires notes are given followed by the main objectives of the two armies.

The final section in each campaign gives a complete order of battle followed by a sketch map. The leaders and regimental units are graded for the Johnny Reb rules (number of men, type of weapon, and quality), but these campaigns can be adapted to other rules systems.