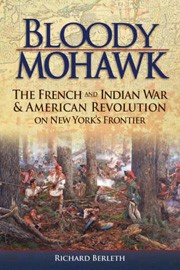 The Mohawk River Valley in New York state sat right in the middle of the expansion of the American frontier during the French & Indian War and the American Revolution and saw its share of warfare. When the fighting was over, the valley lay in ruins and as much as two-thirds of its population lay dead or had been displaced. The sweeping historical narrative chronicles the years 1713 to 1794 as the valley changed from a fast-growing agrarian region streaming with colonial traffic to a war-ravaged wasteland. It covers the relationship of early settlers to the Iroquoian people who made their homes beside the great river and includes profiles of key participants, along with contemporary perspectives of the raids, ambushes, and expeditions. Bloody Mohawk offers insight into the roots of civil war in nonnegotiable ethnic and cultural misunderstandings.