THE BATTLE OF TORNAVENTO: 1636 and the 30 Years War in Italy 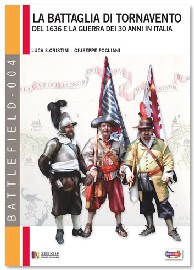 by Cristini, Luca and Pogliani, Giuseppe

The Battle of Tornavento was a battle fought in Italy on June 22, 1636 during the Thirty Years' War. In 1636, Cardinal Richelieu had persuaded the Duke of Savoy (Vittorio Amedeo I) to launch an offensive on the Spanish Duchy of Milan. A French Army crossed the Ticino river between Oleggio and Lonate Pozzolo, but was checked by a larger Spanish army, and dug in to await their Savoyard allies.

On June 22 the Spanish attacked, but were held back after the arrival of the army of Victor Amadeus I, Duke of Savoy. Fighting in the summer heat was savage and bloody, in a heathland described by Spanish officers as 'sin arbol, y con falta de agua' ('treeless, and lacking water').

The Spanish abandoned the battlefield and retired to Boffalora. The Franco-Savoyard army remained some days near Tornavento, sacking nearby towns and damaging a canal, but decided to conduct a withdrawal from Milanese territory. Little had been achieved with this battle and the invasion of Lombardy turned out to be a complete failure.