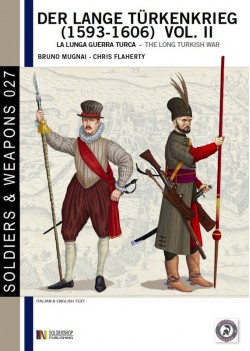 Now with English text. Includes 16 full-color pages, with many b/w illustrations and maps.

The war of 1593-1606 can be regarded as the final episode of a long duel between Vienna and Istanbul that began after the Battle of Mohacs (1526). Following that Turkish victory, the Sultan extended his control over two thirds of Hungary and directly threatened Austria, which was the only power that opposed the Turks in the Danube region.

Austria tried to extend political control over the Kingdom of Hungary, but Hungary supported the election of Janos Szapolyai (1487-1540). The Austrians, however, acted swiftly against the decisions of the Hungarian diet and in 1527 forced Szapolyai, formerly elected King of Hungary, into exile in Poland.

In 1529, the dethroned Szapolyai obtained the support of the Sultan to reclaim his rights. Suleiman the Magnificent (1496-1566) vowed to march on Vienna and lays siege to the Habsburg capital.