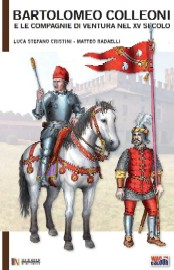 by Cristini, Luca and Radaelli, Matteo

Colleoni was born at Solza, in the countryside of Bergamo (then part of the Duchy of Milan), where he prepared his magnificent mortuary chapel, the Cappella Colleoni, in a shrine that he seized when it was refused him by the local confraternity, the Consiglio della Misericordia. His family was a noble one, exiled with the rest of the Guelphs by the Visconti. Bartolomeo's father Paolo seized the castle of Trezzo and held it until he was assassinated by his cousins, probably acting on order of Filippo Maria Visconti, Duke of Milan.

The young Colleoni trained at first in the retinue of Filippo d'Arcello, the new master of Piacenza. Then he entered the service of various condottieri, beginning with Braccio da Montone, who was skirmishing in Apulia, profiting from the struggles between Alfonso of Aragon and Louis of Anjou during the weak sovereignty of Queen Joan II by taking Alfonso's cause, and then of Carmagnola. After the latter was put to death at Venice (1432), Colleoni passed to direct service of the Venetian Republic, entering on the major phase of his career.

Although Gianfrancesco Gonzaga was nominally commander-in-chief, Colleoni was in fact the true leader of the army. He recaptured many towns and districts for Venice from the Milanese, and when Gonzaga went over to the enemy, Colleoni continued to serve the Venetians under Erasmo da Narni (known as Gattamelata) and Francesco Sforza, winning battles at Brescia, Verona, and on the Lake of Garda...