CRISIS IN THE ARDENNES: The Battle of The Bulge 1944 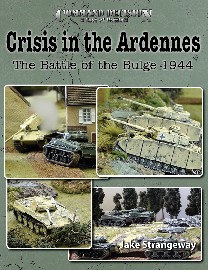 On December 16th, 1944 the German Army launched Operation Wacht am Rhein (Operation Watch on the Rhine). This operation, whose goal was to split the Allied armies and capture Antwerp, was the last major offensive launched by Germany in the West. Known as the 'Battle of the Bulge' due to the shape of the German advance into Allied lines, it has secured its place in history as the largest battle fought by America in the war, and the nail in the coffin of the Wehrmacht.

An overview history of the German Operation Wacht am Rhein from inception to completion; covering the major fighting of the campaign.

10 historical battles presented as game battles - from the opening shots on the 16th at Skyline Drive to the desperate German attempt to cut the Bastogne Corridor.