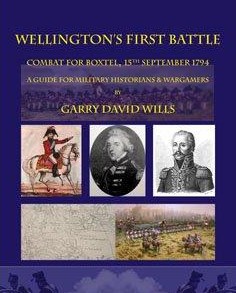 Full color throughout and illustrated with campaign and battlefield maps.

Tells the story of the Duke of Wellington's involvement in his first campaign -- the Duke of York's defence of Belgium and Holland in 1794 and early 1795.

During this campaign, the Duke of Wellington fought his first battle, the combat of Boxtel on the 15th September 1794. The Duke of Wellington is rightly considered a 'great commander', arguably Great Britain's greatest soldier. It is surprising therefore that so little has been written about his early career and the formative experiences of war that guided him in his rise to greatness. Historians past and present have naturally focussed on the Wars of Napoleon rather than those of the preceding Revolutionary period. However the French Revolutionary Wars witnessed the art of warfare in arguably a greater state of flux than the later Napoleonic period and provided the training ground for all the great soldiers who fought for and against Napoleon.

In August 1794, while Napoleon languished in prison in Fort Carre near Antibes, the focus of the war was more than five hundred miles away to the north in the Netherlands, where Revolutionary France's largest and most powerful armies fought the combined forces of Austria, Great Britain and the United Provinces.

The man who would become the Duke of Wellington, Field Marshal in several countries, had departed from Cork as Sir Arthur Wesley, Lieutenant-Colonel of the 33rd Foot, the regiment that would later bear his name. Wesley and his regiment joined Lord Moira's force and travelled to Ostend in order to reinforce the army of the Duke of York. The second half of 1794 provided Wesley with his first active service on campaign, in which he found neither fame (his name is not mentioned in any of the contemporary accounts of Boxtel) nor fortune, but he did gain experience.