BATTLE OF BELLICOURT TUNNEL: Tommies, Diggers, and Doughboys on the Hindenburg Line, 1918 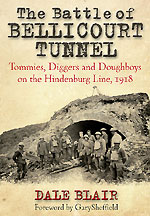 The Bellicourt Tunnel attack, fought in the fading autumn light, was very much an inter-Allied affair and marked a unique moment in the Allied armies' endeavors. It was the first time that such a large cohort of Americans had fought in a British army. Additionally, untried American II Corps and experienced Australian Corps were to spearhead the attack under the command of Lieutenant General Sir John Monash with British divisions adopting supporting roles on the flanks.

Blair forensically details the fighting and the largely forgotten desperate German defense. Although celebrated as a marvelous feat of breaking the Hindenburg Line, the American attack failed generally to achieve its set objectives and it took the Australians three days of bitter fighting to reach theirs. Blair rejects the conventional explanation of the US 'mop up' failure and points the finger of blame at Rawlinson, Haig, and Monash for expecting too much of the raw US troops, singling out the Australian Corps commander for particular criticism.