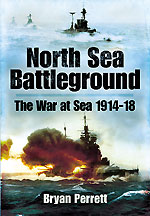 During WWI, the North Sea became the principal battleground for the navies of Britain and Germany. This book explains in chronological order the major encounters between Kaiser Wilhelm II's High Seas Fleet and the Royal Navy. It also includes other important operations such as mine-laying and sweeping, the Zeppelin Offensive, the bomber offensive against the UK, and complete background operational information within the area.

Engagements of special note include The Battle of Heligoland Bight, the attempted first German Bombardment of Yarmouth; the German bombardments of Scarborough, Whitby and Hartlepool, together with the Scheer's escape; and the Battle of Dogger Bank. Other actions include the Zeppelin raids, unrestricted U Boat Warfare, the Battle of Jutland and its consequences, the second Battle of Heligoland Bight, the climax and defeat of the German heavy bomber air offensive against the UK, the 1918 Zeebrugge and Ostend raids, North Sea mine barriers, and the mutiny of the High Seas Fleet. Includes 30 b/w plates.