RETREAT AND REARGUARD 1914: The BEF's Actions From Mons to the Marne 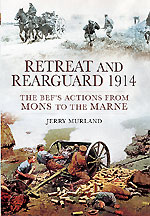 The British action at Mons on 23 August 1914 was the catalyst for what became a full blown retreat over 200 blood drenched miles. This book examines eighteen of the desperate rearguard actions that occurred during the twelve days of this near rout. While those at Le Cateau and Nery are well chronicled, others such as cavalry actions at Morsain and Taillefontaine, the Connaught Rangers at Le Grand Fayt and 13 Brigade's fight at Crepy-en-Valois are virtually unknown even to expert historians. We learn how in the chaos and confusion that inevitably reigned units of Gunners and other supporting arms found themselves in the front line.

The work of the Royal Engineers responsible for blowing bridges over rivers and canals behind the retreating troops comes in for particular attention and praise. Likewise that of the RAMC.

No less than 16 VCs were won during this historic Retreat, showing that even in the darkest hours individuals and units performed with gallantry, resourcefulness and great forbearance.

The book comes alive with first hand accounts, letters, diaries, official unit records, much of which has never been published before.