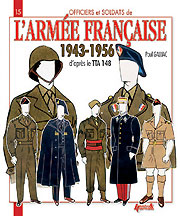 After adopting the American uniform in 1943 when the French Expeditionary Corps in North Africa were equipped by the United States, the high command and the units were constantly improving it with additions conforming to French military traditions. However, once peace had returned, its metropolitan army needed new dress and uniforms.

The result of this development bore its fruit in 1954, nine years after the end of the conflict. It was in that year that the TTA 148 appeared, a set of regulations for all the arms, in color, given over to the uniforms and insignia of the French Army.

This fully illustrated volume includes the black and white plates of the officers' uniforms published in April 1954, and shows how from 1943 to 1956, the high command and the units managed to transform a uniform which was dull by its very nature into a rather becoming and tasteful uniform inspired by the great tradition of the French Army.