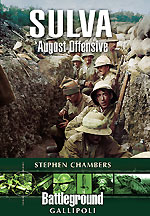 The landing at Suvla Bay, part of the August Offensive, commenced on the night of 6 August 1915. It was intended to support a breakout from Anzac Beach. Despite early hopes from a largely unopposed landing, Suvla was a mismanaged affair that quickly became a stalemate.

The newly formed IX Corps, commanded by Lieutenant General Sir Frederick Stopford, failed, not for lack of sacrifice by its New Army and Territorials, but because of a failure of generalship. Opportunities were thoughtlessly wasted due to lethargy. Suvla not only signaled the end of Stopford and many of his Brigadiers, but also saw the end of the Commander in Chief, Sir Ian Hamilton. It was the beginning of the end of the Gallipoli gamble and in its own right created a catalyst of disaster that would come to represent the failed campaign.

This book adds to the Gallipoli story by recounting the Suvla Bay landing through a mix of official accounts intertwined with a rich collection of the participants' letters, diaries, personal accounts, photographs and maps.