THE INDIAN MILITIA AND DESCRIPTION OF THE INDIES 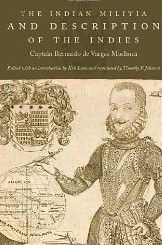 Sometimes referred to as the first published manual of guerrilla warfare, Bernardo de Vargas Machuca's Indian Militia and Description of the Indies is actually the first known manual of counterinsurgency, or anti-guerrilla warfare. Published in Madrid in 1599 by a Spanish-born soldier of fortune with long experience in the Americas, the book is a training manual for conquistadors. The Aztec and Inca Empires had long since fallen by 1599, but Vargas Machuca argued that many more Native American peoples remained to be conquered and converted to Roman Catholicism. What makes his often shrill and self-righteous treatise surprising is his consistent praise of indigenous resistance techniques and medicinal practices.

Containing advice on curing rattlesnake bites with amethysts and making saltpeter for gunpowder from concentrated human urine, The Indian Militia is a manual in four parts, the first of which outlines the ideal qualities of the militia commander. Addressing the organization and outfitting of conquest expeditions, Book Two includes extended discussions of arms and medicine. Book Three covers the proper behavior of soldiers, providing advice on marching through peaceful and bellicose territories, crossing rivers, bivouacking in foul weather, and carrying out night raids and ambushes. Book Four deals with peacemaking, town-founding, and the proper treatment of conquered peoples.

Appended to these four sections is a brief geographical description of all of Spanish America, with special emphasis on the indigenous peoples of New Granada (roughly modern-day Colombia), followed by a short guide to the southern coasts and heavens. This first English-language edition of The Indian Militia includes an extensive introduction, a posthumous report on Vargas Machuca's military service, and a selection from his unpublished attack on the writings of Fray Bartolome de Las Casas.