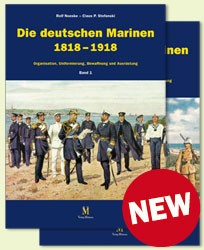 by Noeske, Rolf and Stefanski, Claus

After nearly ten years of research, the authors put in a two-volume work of 1336 pages (304 color illustrations) a standard work on the uniforms, weapons, and equipment of the German Navy of 1818 to 1918 -- organization, personnel, career, and rank structures of military and civilian officials. Also included: detailed information about operations of the Marine Corps in the tropics or on the land front in Flanders and color images of many items of clothing and equipment.

Volume 1:
The first volume covers the Prussian Navy uniforms (officers, Marines, and ordinary seamen) from 1818 to 1888, including the Royal Prussian Navy, the Federal Navy, the North German Confederation, and the Imperial German Navy under Kaiser Wilhelm I and Frederick III. Individual grades and careers are examined, including details such as hat bands and firearms.

Volume 2:
The second volume continues through November 1918, and covers the peculiarities of the uniforms, equipment and armament of the ship crews including the khaki and Braundrelluniform the occupation of Kiao-Chow and the clothing of the Marine Expeditionary Force in Cameroon, German Southwest Africa, German East Africa, and China, and the Marine Corps Detachment Scutari. The Marines in Flanders are handled here, as Imperial Naval troops were deployed in ground combat in the trenches and on the coastal front. A variety of Marine Corps battle formations, including flying and floating associations and the shipyards and bases, are presented, including land front uniforms, weapons, and equipment. A comprehensive source and bibliography as well as the separate, detailed color image section, completes the second volume.