BLOOD ON THE SNOW: The Carpathian Winter War of 1915 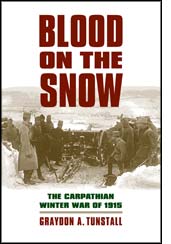 by Tunstall, Graydon A.

The Carpathian campaign of 1915, described by some as the 'Stalingrad of the First World War,' engaged the million-man armies of Austria-Hungary and Russia in fierce winter combat that drove them to the brink of annihilation. Habsburg forces fought to rescue 130,000 Austro-Hungarian soldiers trapped by Russian troops in Fortress Przemysl, but the campaign was waged under such adverse circumstances that it produced six times as many casualties as the number besieged. It remains one of the least understood and most devastating chapters of the war-a horrific episode only glimpsed previously but now vividly restored to the annals of history by Graydon Tunstall.

The campaign, consisting of three separate and ultimately doomed offensives, was the first example of 'total war' conducted in a mountainous terrain, and it prepared the way for the great battle of Gorlice-Tarnow. Habsburg troops under Conrad von H?tzendorf faced those of General Nikolai Ivanov, which together totaled more than two million soldiers. None of the participants were psychologically or materially prepared to engage in prolonged winter mountain warfare, and hundreds of thousands of soldiers suffered from frostbite or succumbed to the 'White Death.'

Tunstall reconstructs the brutal environment - heavy snow, ice, dense fog, and frigid winds - to depict fighting in which a man lasted on average between five to six weeks before he was killed, wounded, captured, or committed suicide. Meanwhile, soldiers warmed rifles over fires to make them operable and slaughtered thousands of horses just to ward off starvation.

This riveting depiction of the Carpathian Winter War is the first book-length account of that vicious campaign, as well as the first English-language account of Eastern Front military operations in World War I in more than thirty years. Based on exhaustive research in Vienna's and Budapest's War Archives, Tunstall's gripping narrative incorporates material drawn from eyewitness accounts, personal diaries, army logbooks, and correspondence among members of the high command.