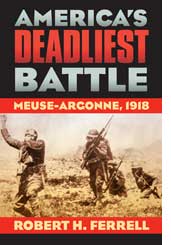 The great battle of the Meuse-Argonne was the costliest conflict in American history, with 26,000 men killed and tens of thousands wounded. Involving 1.2 million American troops over 47 days, it ended on November 11 - what we now know as Armistice Day - and brought an end to World War I, but at a great price.

Distinguished historian Robert Ferrell re-examines factors in the war that many historians have chosen to disregard. He points first to the failure of the Wilson administration to mobilize the country for war. American industry had not been prepared to produce the weaponry or transport ships needed by our military, and the War Department-with outmoded concepts of battle shaped by the Spanish-American War-shared equal blame in failing to train American soldiers for a radically new type of warfare.

Besides the U.S. shortcomings in mobilization and tactics, Ferrell points to the greatest failure of all: the failure to learn from the experience, as after the armistice the U.S. Army retreated to its prewar mindset. Enhanced by more than four dozen maps and photographs, America's Deadliest Battle is a riveting revisit to the forests of France that reminds us of the costs of World War I-and of the shadow that it cast on the twentieth century.