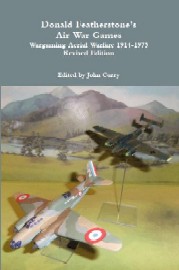 Donald Featherstone's book on wargaming with model planes was hugely influential when it was first published in 1966. It included many new ideas on how to recreate dog fights on the tabletop. This revised edition brings it up to date with notes on availability of models, commercial board games and includes three new sets of rules.

This was one of the three wargaming books that were instrumental in launching modern wargaming. The other two books were Donald Featherstone Naval Wargames and the original War Games. This revised edition includes chapters on:

Sturmstaffel: Defending the Reich 1944 by Tim Gow
Rolling Thunder: Air combat over South-East Asia by Ian Drury
On a Wing and Prayer - Bomber Command in the Battle for the Ruhr, July 1943 by John Armatys