HOME BEFORE THE LEAVES FALL: A New History of the German Invasion of 1914 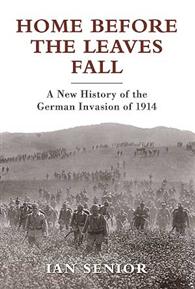 The German invasion of France and Belgium in August 1914 came close to defeating the French armies, capturing Paris and ending the First World War before the autumn leaves had fallen. But the German armies failed to score the knock-out blow they had planned. The war would drag on for four years of unprecedented slaughter. There are many accounts of 1914 from the British point of view, and the achievements of the British Expeditionary Force are the stuff of legend.

But in reality, there were only four British divisions in the field, while the French and Germans had more than 60 each. The real story of the battle can only be told by an author with the skill to mine the extensive German and French archives. Ian Senior does this with consummate skill, weaving together strategic analysis with diary entries and interview transcripts from the soldiers on the ground to create a remarkable new history.