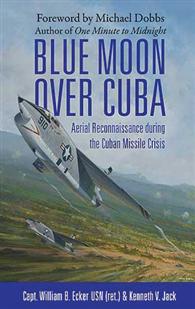 by Ecker, William and Jack, Kenneth and Dobbs, Michael

Most books on the Cuban Missile Crisis tell the story using the memoirs of those who advised President Kennedy as he struggled to avoid World War III. This book is the only known personal account of the lead photographic reconnaissance squadron's scouting dangerous low-level operations, flying the supersonic RF-8A Crusader, during the classified Operation Blue Moon.

Captain Ecker was the commanding officer of US Navy Light Photographic Squadron 62 (VFP-62, otherwise known as Fightin' Photo) during the Cuban Missile Crisis, a team created for reconnaissance and aerial photography, and consulted on the movie Thirteen Days, which included dramatic scenes of his first mission over Cuba on October 23, 1962. Blue Moon over Cuba is an authoritative and complete account of the low-level reconnaissance that might be said to have helped JFK avert nuclear Armageddon.