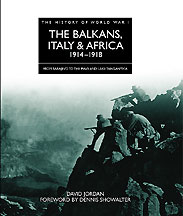 150 color and b/w photographs and 50 artworks. Italy had been allied with the German and Austro-Hungarian Empires since 1882 as part of the Triple Alliance. However, the nation had its own designs on Austrian territory in Trentino, Istria, and Dalmatia. Rome had a secret 1902 pact with France, effectively nullifying its alliance.

At the start of hostilities, Italy refused to commit troops, arguing that the Triple Alliance was defensive in nature, and that Austria-Hungary was an aggressor. The Austro-Hungarian government began negotiations to secure Italian neutrality, offering the French colony of Tunisia in return. However, Italy then joined the Entente in April 1915 and declared war on Austria-Hungary in May. Fifteen months later, it declared war on Germany.

Faced with Russia, Austria-Hungary could spare only one third of its army to attack Serbia. After suffering heavy losses, the Austrians briefly occupied the Serbian capital, Belgrade. Serbian counterattacks, however, succeeded in driving them from the country by the end of 1914. The Serbs suffered defeat near modern day Gnjilane in Kosovo, forces being evacuated by ship to Greece.

In late 1915, a Franco-British force landed at Salonica in Greece, to offer assistance and to pressure the government to declare war against the Central Powers. Only at the end of the conflict were the Entente powers able to break through, which was after most of the German and Austro-Hungarian troops had been withdrawn. Some of the first clashes of the war involved British, French and German colonial forces in Africa. On 7 August, French and British troops invaded the German protectorate of Togoland. On 10 August German forces in South-West Africa attacked South Africa; sporadic and fierce fighting continued for the remainder of the war.