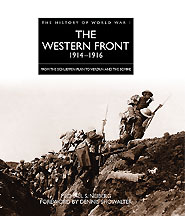 150 color and b/w photographs and 50 artworks. After the first few months of World War I, the Western Front consisted of a relatively static line of trench systems which stretched from the coast of the North Sea southwards to the Swiss border.

To try to break through the opposing lines of trenches and barbed wire entanglements, both sides employed huge artillery bombardments followed by attacks by tens of thousands of soldiers. Battles could last for months and led to casualties measured in hundreds of thousands for attacker and defender alike. After most of these attacks, only a short section of the front would have moved and only by a kilometer or two. After Gallipoli, Australians were moved to fight in France on the western Front, in battles including the Battle of the Somme. On the first day of the 1916 Battle of the Somme, 60,000 Allies were casualties, including 20,000 deaths.

The principal adversaries on the Western Front, who fielded armies of millions of men, were Germany to the East against a western alliance to the West consisting of France and the United Kingdom with sizable contingents from the British Empire, especially the Dominions. The United States entered the war in 1917 and by the summer of 1918 had an army of around half a million men which rose to a million by the time the Armistice was signed on November 11, 1918. For most of World War I, Allied Forces, predominantly those of France and the British Empire, were stalled at trenches on the Western Front.

With the last few men who served in World War I now dying out, and the 90th anniversary of the Armistice coming in November 2008, there is no better time to reevaluate this controversial war and shed fresh light on the conflict. With the aid of numerous black and white and color photographs, many previously unpublished, the World War I series recreates the battles and campaigns that raged across the surface of the globe, on land, at sea and in the air. The text is complemented by full-color maps that guide the reader through specific actions and campaigns.