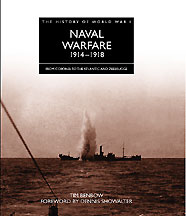 150 color and b/w photographs and 50 artworks. At the start of the war, the German Empire had cruisers scattered across the globe, some of which were subsequently used to attack Allied merchant shipping.

The British Royal Navy systematically hunted them down, though not without some embarrassment from its inability to protect Allied shipping. However, the bulk of the German East-Asia squadron did not have orders to raid shipping and was instead underway to Germany when it encountered elements of the British fleet. Soon after the outbreak of hostilities, Britain initiated a naval blockade of Germany. The strategy proved effective, cutting off vital military and civilian supplies. The 1916 Battle of Jutland developed into the largest naval battle of the war, the only full-scale clash of battleships during the war.

The Kaiserliche Marine's High Seas Fleet, commanded by Vice Admiral Reinhard Scheer, squared off against the Royal Navy's Grand Fleet, led by Admiral Sir John Jellicoe. The engagement was a standoff, as the Germans, outmaneuvered by the larger British fleet, managed to escape and inflicted more damage to the British fleet than they received. Strategically, however, the British asserted their control of the sea, and the bulk of the German surface fleet remained confined to port for the duration of the war. German U-boats attempted to cut the supply lines between North America and Britain. The nature of submarine warfare meant that attacks often came without warning, giving the crews of the merchant ships little hope of survival.

The U-boat threat lessened in 1917, when merchant ships entered convoys escorted by destroyers. With the aid of numerous black and white and color photographs, many previously unpublished, the World War I series recreates the battles and campaigns that raged across the surface of the globe, on land, at sea and in the air. The text is complemented by full-color maps that guide the reader through specific actions and campaigns.