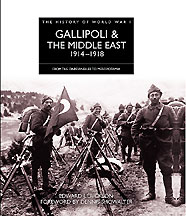 150 color and b/w photographs and 50 artworks. The Allied landing and subsequent campaign on the peninsula during World War I is usually known in Britain as the Dardanelles Campaign and in Turkey as the Battle of ?anakkale.

In Australia, New Zealand, South Africa and Newfoundland, the term Gallipoli alone is used to describe the 8 month campaign. In early 1915 Russia was fighting a multi front war against Germany, Austria/Hungary, and Turkey. While it had a sizable army it struggled to deliver sufficient supplies to the troops.

The landings at Gallipoli were an Allied attempt to clear a supply path through the Dardanelles to Russia. This would also assist them by putting pressure on Turkey by threatening Istanbul. On April 25, 1915, after failed attempts to force a passage through the Dardanelles by naval forces alone, a force of British Empire and French troops landed at multiple places along the peninsula. The battles over the next 8 months saw high casualties on both sides due to the exposed terrain, weather and closeness of the front lines.

The invasion forces were successfully blocked by the Turkish troops and the subsequent Allied withdrawal meant the Russians would not be receiving supplies through the Dardanelles. The battle is often referred to for its successful stealthy retreat which was completed with minimal casualties, the ANZAC forces completely retreating by December 19, 1915 and the remaining British elements by January 9, 1916. Overall, there were around 300,000 Allied casualties including around 100,000 deaths and 150,000 Turkish casualties including around 20,000 deaths.

The Gallipoli campaign gave an important boost to the career of Mustafa Kemal Ataturk, a little-known army commander who became a national hero, was promoted to Pasha, and became the founder of the modern Turkish state with the collapse of the Ottoman Empire, at the end of World War I.