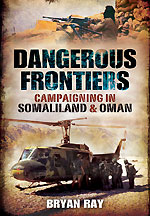 In Part 1 of his book the author describes his life as a young officer in the Somaliland Scouts in the (then) British Protectorate of Somaliland. At that time tribal quarrels, generally over water, were taking place in the troubled strip of country between the Protectorate and Ethiopia; the Ogaden. It was the Scouts' difficult task to keep the warring clansmen apart. It gives a vivid account of a nineteen-year-old in command of Somali troops in a fascinating and unpredictable country.

The second part of the book deals with the author's second period of service with Muslims, a quarter of a century later. This time in the Southern Province of Oman - Dhofar. Here he commanded the Northern Frontier Regiment of the Sultan's Armed Force in a limited but fierce war against Communist Insurgents. It shows how the tide was turned against a brave enemy fighting on their home ground - the savage wadis and cliffs of the jebel. 6x9 inches, 16 pages of b/w plates.