COUNTERINSURGENCY IN AFRICA: The Portuguese Way of War 1961-74 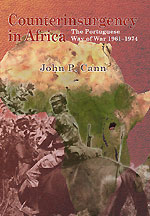 Portugal was the first colonial power to arrive in Africa and the last to leave. As other European states were granting independence to their African possessions, Portugal chose to stay and fight despite the small odds of success. That it did so successfully for thirteen years across the three fronts of Angola, Guine, and Mozambique remains a remarkable achievement, particularly for a nation of such modest means.

The Portugese approach to the conflict was distinct in that it sought to combine the two-pronged national strategy of containing the cost of the war and of spreading the burden to the colonies, with the solution on the battlefield. Even today Portugal's systematic and logical approach to its insurgency challenge holds valuable lessons for any nation forced to wage a small war on the cheap.

John P. Cann's study is both wide-ranging and comprehensive, providing a description and analysis of Portuguese counterinsurgency, including aspects such as intelligence and mobility, besides discussing social and logistical operations. Whilst discussing operations that took place during the 1960s and 1970s this study remains very relevant to present-day counterinsurgency operations.