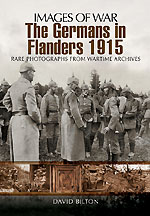 Covers the actions of the German Army in the Low Countries during 1915 and 1916. In its broad compass it looks at the battles with the French, Belgians and British, concentrating mostly on the latter.

Each phase and aspect of the period is detailed from the German point of view using primary and secondary sources from both Germany and Britain. The illustrations provide a pictorial background in both a specific and general form, highlighting life in the front-line as well as rear areas and show how the War affected the towns and villages of the region. 250 b/w photos.