GERMAN ARMY ON THE WESTERN FRONT 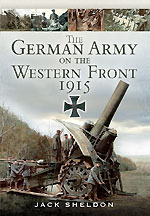 Examines the German mindset at the close of 1914 when it became apparent that a quick victory was no longer a possibility. Both sides were temporarily exhausted in static positions from the Channel to the Swiss Border. In a reversal of roles, the French launched major offensives in Champagne and Artois, while the British Army, adapting to the demands of large scale continental warfare, went on the offensive in support at Neuve Chapelle, Aubers Ridge, and Loos.

Such was the Allied pressure that the only German offensive in 1915 was at Ypres in April using gas on a large scale for the first time.

1915 was a transitional year on the Western Front with lessons being learned the hard way by both sides prior to the massive attrition battles of 1916 and 1917. 40 original b/w images.