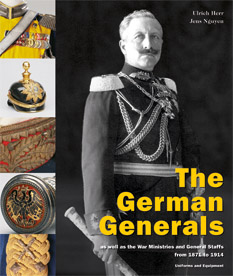 by Herr, Ulrich and Nguyen Jens

This book is part of the series that began with the two volumes published on the German cavalry and infantry. Covering the generals, the war ministries and the general staffs, it brings us another step closer to completing the picture of the colorful uniforms of the Imperial German Army in the period between 1871 and 1914. 850 b/w and color photos and illustrations.

Descriptions of the uniforms are illustrated with color photographs of items worn by well-known historical figures such as Kaiser Wilhelm II, Generalfeldmarschalls von Moltke and von Mackensen, Wurttemberg's General der Kavallerie Graf von Zeppelin and members of the Royal houses of Bavaria, Saxony, and Wurttemberg, the Grand Duchy of Baden and the princely house of Waldeck and Pyrmont. Most of these have never been published before.