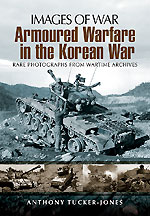 Part of the IMAGES OF WAR series. 200 b/w illustrations selected to show Soviet-built T-34/85s and Su-76s, American M4 Shermans, M26 Pershings and M46 Pattons, and British Cromwells and Centurions in action during the Korean War of 1950-53.

Korea, with its rugged mountains, narrow passes, steep valleys and waterlogged fields was not ideal tank country so the armor mainly supported the infantry and rarely engaged in battles of maneuver. Yet the wide variety of armor supporting UN and North Korean forces played a vital if unorthodox role in the swiftly moving campaigns.