DEFENCE OF THE DARDANELLES: From Bombards to Battleships 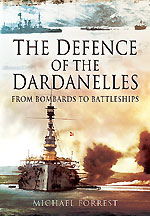 The Straits of Dardanelles that separates Europe and Asia Anatolia, were fortified in the 15th century with batteries housing massive bronze bombards -- unwelcome ships had to run a formidable gauntlet.

On 18 March 1915, a powerful fleet of British and French warships attempted to overwhelm the shore defenses of the Dardanelles to allow minesweepers to clear the Straits. The attack failed at huge cost; three ships sunk and three more seriously damaged.

By bringing together many threads of information, including extracts from British intelligence sources that had previously determined that a naval attack alone would not succeed; this definitive work examines the flaws of Winston Churchill's strategy and identifies the inadequacies of pitting warships against shore fortifications. The Allied inability to control the Straits necessitated the disastrous Allied invasion of Gallipoli that cost the lives of some 250,000 men.

From the 19th century, the Ottoman army and Turkey's coastal defenses relied entirely on the German firm of Krupp for guns. The author describes how this choice was a crucial element to the successful defense of the Dardanelles.

Many of the fortifications on the Gallipoli peninsula and the Asian shore are still accessible. The Defense of the Dardanelles identifies those that can be visited, many of which still have wrecked guns emplaced.