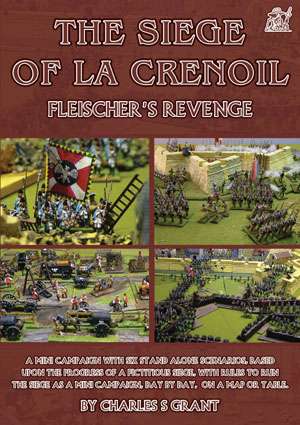 This is the fourth in a series of mini-campaign books. It follows on from The Raid on St. Michel, The Annexation of Chiraz, and The Wolfenbuttel War. This book, like its predecessors, provides a number of teasers or scenarios, with each one linked to the next. What I have done is to provide the key actions within the context of a mini-campaign, a siege, in this case, but without the need for much of the campaign mechanics. In addition, I have provided the basis to run the siege as a campaign, day by day, using a map, and fighting each scenario as it arises. There are some basic rules that cover the siege works, firing and damage. The business of sieges brings with it a long list of technical terms, and a glossary of these has been provided near the end of this book.

In order to conceal from the opposing commanders the total forces of the enemy in the campaign, details of the relevant forces for one side have been set out in the instructions for that side, to be read only by the relevant player and the organizer. Suggested forces for the stand-alone version provided.