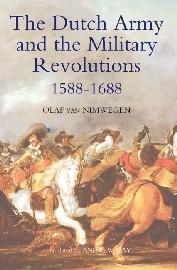 The Dutch army is central to all discussions about the tactical, strategic and organizational military revolution of the early modern period, but this is the first substantial work on the subject in English. This book addresses the changes that were effected in the tactics and organization of the Dutch armed forces between 1588 and 1688. It shows how in the first decades of this period the Dutch army was transformed from an unreliable band of mercenaries into a disciplined force that could hold its own against the might of Spain.

Under the leadership of Maurits of Nassau and his cousin Willem Lodewijk a tactical revolution was achieved that had a profound impact on battle. However, the Dutch army's organizational structure remained unchanged and the Dutch Republic continued to rely on mercenaries and military entrepreneurs. It was not until the latter half of the seventeenth century that the Dutch, under William III of Orange, Captain-General of the Union, introduced revolutionary changes in military organization and established an efficient standing army. This army withstood attacks by Louis XIV and the Dutch reforms were copied by the English.