A WHISPER IN THE REEDS: 'The Terrible Ones' - South Africa's 32 Battalion at War 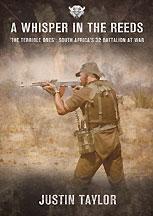 This amazing work relates the experiences of Justin Taylor who served as the Signals Officer for the South African Defense Force's infamous 32 Battalion - the 'Terrible Ones'! As a young officer he trained in the intricacies of Signaling before volunteering for Border Duty and service with 32 Battalion - a request that was met with astonishment - 'you want to work with 32 Battalion!?'

This book takes you into the discipline of military communications as never before, delivering a new perspective on the work of 'Nine Charlie'; the Battalion Signals Officer with his mantra of 'check, check and recheck!' It illustrates how a unit's Signals Officer sits at the core of military operations, allowing Command elements to control and coordinate war-fighting, whilst countering the never ending failures of equipment and communications. What is more, it emphasizes how the Signals Officer needs to remain abreast of enemy eavesdropping.

Little is known of 32 Battalion - a unit that drew its origins from the Angolan Civil War of 1975 - most of its troops were black Portuguese-speaking soldiers; the remnants of Holden Roberto's FNLA guerrilla army that had fought against the Portuguese colonials. Established by the legendary Colonel Breytenbach and barracked at 'Buffalo Base' in the Caprivi Strip, 32 Battalion was to develop a reputation for military prowess that was second to none. 'A Whisper in the Reeds' takes you into the heart of this elite unit and its military capability. It relates how black and white worked together with a mutual respect forged in the cauldron of combat.

Taylor was placed to take part in one of 32 Battalion's most spectacular operations - the Battle of Savate. Here, the Battalion undertook an aggressive assault on an entrenched enemy brigade that was positioned deep in Angola. Thrown into the chaos of combat, Taylor experienced the intensity and horror of close quarter battle. Working close with the Officer Commanding he saw first hand the difficulty of command and control in a kinetic assault environment. In addition he saw close friends killed and was himself wounded. His account of this historic battle is one of the most comprehensive ever and should be read by every student of military history.

Tasked to train new signalers in the skill of military signaling, Taylor designed and delivered a training program that earned him the respect of both his superiors and the students under training - a Chief of the SADF Commendation medal acknowledging his skill and professionalism.

Justin Taylor was the consummate soldier, utterly professional and dedicated to the trade of military signaling. Read this work and learn why 'a whisper in the reeds' will always carry the story of 32 Battalion.

Justin Taylor grew up on a sugar farm in Zululand and spoke Zulu before he could speak English. He was sent to boarding school for ten years before reporting for National Service in 1979. Doing 'your bit' for your country ran in Taylor's family - his grandfather was a fighter pilot in the Royal Flying Corps and in the Second World War his father flew Spitfires for the SAAF.

In 1979 he was drafted into the military, completing two years of National Service as a Signals Officer with 32 Battalion in the Namibian / Angolan conflict (1979-80). Justin was wounded at the Battle of Savate and awarded the Chief of SADF Commendation Medal (MMM) for services of a high order. He then went on to complete part-time military service with 2 Reconnaissance Regiment.