A HISTORY OF THE FRENCH WAR: Ending in the Conquest of Canada 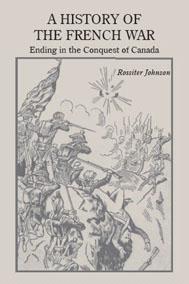 This engaging book covers nearly every issue related to the French and Indian War, and the events that led up to it. Organized chronologically, the topics include: explorations by Cartier and Champlain; the Jesuits; interactions with Algonquins and Iroquois; La Salle; King William's War; massacres at Dover, Saco and Schenectady; Queen Anne's War and the attacks on Wells, Saco, Casco, Deerfield and Lancaster; attack on Haverhill; Father Rasle; forts at Niagara, Oswego and Crown Point; King George's War; attacks on Canso and Annapolis; La Loutre; the Siege of Louisbourg; and exile of the Acadians.