VIRGINIA AND THE FRENCH AND INDIAN WAR 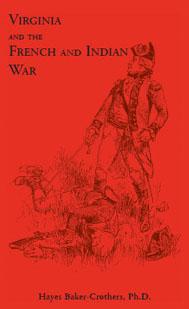 When hostilities flared between the British and French inhabitants of North America in the 1750s, the Virginia Colony and the Ohio Trading Company took center stage in the events that would later be remembered as the French and Indian War. Habitually without funds, supplies, experienced military leadership, or even a motivated body of men willing to defend their homes, the Virginia Colony struggled desperately to protect its western frontier from Indian incursions and partisan raids meant to wipe out the English presence in the Ohio River and Allegheny Mountain regions and secure a French monopoly on Indian trade.

Professor Hayes Baker-Crothers examines the role of the Virginia Colony at the outbreak of war and analyzes Virginia's contributions to the hard-won English victory, hampered for years by the legislative incompetence, military inactivity, and self-interest inherent in the British Colonial system. It is proposed in this text that the root causes of the conflict lay in the colonial rivalries between the British and French empires, and that the nature of the economic rivalry kept the burgesses of Virginia from concentrating on the implementation of an effective wartime strategy until long after the crippling defeat of General Braddock and the increasing frequency of French and Indian attacks deeper and deeper into British territory.

Professor Baker-Crothers is quick to illustrate the self-imposed isolation in which Virginia and her neighboring colonies of Maryland, Pennsylvania and North Carolina made their defense against the French and Indian threat, choosing to fend for themselves and hold out for British aid rather than pool their resources and provide for common security.

Special attention is paid by the author to the following: the crippling defeat of Braddock's expedition; the appointment by Parliament of Earl of Loudon to commander-in-chief of North American forces; the political turmoil and military blundering surrounding that appointment; the imposition of more strict military discipline at the request of George Washington; the dynamic leadership of Virginia Governor Francis Fauquier and British Secretary of State William Pitt; the political stalemate in the Maryland legislature over tax monies spent on supplying the militia; the taking of Forts Frontenac and Duquesne; and other notable campaigns of the conflict. A bibliography and a full name plus subject index add to the value of this work