SPECIAL FORCES PILOT: A Flying Memoir of the Falklands War 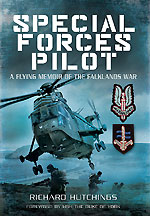 As a Commando helicopter pilot, the author served with 846 Naval Air Squadron in the Falklands War and was decorated for gallantry (DSC). The author re-lives his part in operations, in particular Special Forces intelligence gathering and direct action missions, including the Pebble Island raid. Events are described in detail including the development of pioneering night operating procedures and the conduct of covert and other operationally sensitive missions.

The book includes hitherto undisclosed material relating to Operation MIKADO, the ill-fated Special Forces mission in Argentina with its disastrous consequences for the Task Force. Hutchings was Captain of the Sea King that carried the Special Forces team into Argentina. The operation is described in detail including events in the air and on the ground in Argentina and Chile.

Hutchings recalls his encounter with the Chilean authorities, meetings with British Embassy officials in Santiago, the international press conference, his eventful repatriation to the UK, debriefings in the MoD and time spent in an MI6 safe-house somewhere in England. The book concludes by describing a follow-up visit to Chile by the author in November 1982, at the behest of the Chilean Government.