A GERMAN TOMMY: The Secret of a War Hero 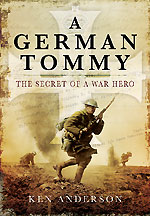 The date: 14 October 1918 - a misty early morning, east of Ledegem, Belgium. Young British Army officer Lieutenant Walter Lancelot Merritt MC carries a large red flag to indicate the center of a brigade-strength advance. He moves ahead of the main force.

Close to the German lines a bullet smashes into Merritt's right leg. Despite the crippling wound he continues to hold the flag aloft ensuring following troops maintain the line as they move on to take long-entrenched German territory. Merritt's courage and leadership resulted in the award of a Bar to his Military Cross.

While undergoing treatment in postwar England, he confessed in a petition to King George his real name was Walter Schwarz. He had deserted from the Australian Imperial Force in 1915 because he feared his German ancestry would prevent him being sent into battle.

George, who had personally decorated him as Merritt at Buckingham Palace, accepted his story and pardoned him for his desertion. The mystery has remained to this day: How did Schwarz manage to maintain his cover for six long years under the most trying circumstances imaginable?

Schwarz's only comment was he would like to say more but could not. He never did. The author has gone behind the accepted facts to tell for the first time the true story of this gallant deserter. He reveals that official documents have been altered and argues that members of a secret society lied and swore false testimony to help Schwarz, acting on their oath to aid a fellow member in distress. The book offers an insight into the way in which people of German origin were treated in Australia and Britain during the First World War. It is a story of bravery and deception unique in the history of war.