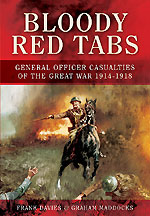 Long before that ghastly and quite unnecessary slogging match in the mud which we now call the First World War had dragged to its blood-soaked conclusion the belief that most of the senior officers had spent their time in comfort and safety in chateaux far behind the lines with no idea of the conditions in which the men they commanded were fighting was firmly embedded in the public mind. As the years pass by that belief has, if anything, become more deeply held, gaining strength from plays like Oh! What a Lovely War, itself based on Alan Clark's book The Donkeys.

It is the purpose of this book to show not only how the myth was born and grew but how totally at odds it is with the facts. Biographies of over 200 officers who held the rank of Brigadier-General or above who were killed or wounded during the war show how closely involved the men at the top were with the men at the front.

Ironically, as the authors point out, this was more than just a waste of blood, for these were the very men whose experience was vital to the successful prosecution of the war. Had they actually stayed in their chateaux, as Lloyd George alleged, they might have done much more to hasten the end of the conflict.

This is not only an invaluable work of reference but a tribute to those gallant senior officers who have been so unfairly traduced by many who should have known better.