THE INDIAN ARMY ON THE WESTERN FRONT: India's Expeditionary Force to France and Belgium in the First World War 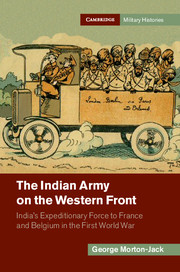 The Indian army fought on the western front with the British Expeditionary Force (BEF) from 1914 to 1918. The traditional interpretations of its performance have been dominated by ideas that it was a failure.

This book offers a radical reconsideration by revealing new answers to the debate's central questions, such as whether the Indian army 'saved' the BEF from defeat in 1914, or whether Indian troops were particularly prone to self-inflicting wounds and fleeing the trenches. It looks at the Indian army from top to bottom, from generals at headquarters to snipers in no man's land.

It takes a global approach, exploring the links between the Indian army's 1914-18 campaigning in France and Belgium and its pre-1914 small wars in Asia and Africa, and comparing the performance of the Indian regiments on the western front to those in China, East Africa, Mesopotamia, and elsewhere.