THE ITALIAN ARMY AND THE FIRST WORLD WAR 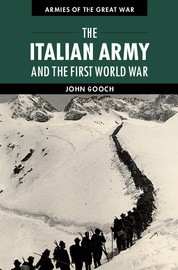 Account of the role and performance of the Italian army during WWI. Drawing from original, archival research, it tells the story of the army's bitter three-year struggle in the mountains of Northern Italy, including the 11 bloody battles of the Isonzo, the near-catastrophic defeat at Caporetto in 1917, and the successful, but still controversial, defeat of the Austro-Hungarian army at Vittorio Veneto on the eve of the Armistice.

Setting military events within a broader context, the book explores pre-war Italian military culture and the interactions between domestic politics, economics, and society. In a unique study of an unjustly neglected facet of the war, illustrates how General Luigi Cadorna, a brutal disciplinarian, drove the army to the edge of collapse, and how his successor, General Armando Diaz, rebuilt it and led the Italians to their greatest victory in modern times. Includes 17 b/w illustrations and six maps.