GREAT PUSH ON THE SOMME 1916: Images of War Series 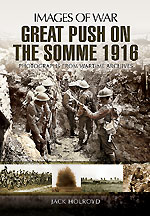 Originally: 'Sir Douglas Haig's Great Push; The Battle of the Somme; A popular, pictorial and authoritative work on one of the Greatest Battles in History, illustrated by about 700 wonderful Official Photographs and Cinematograph Films; By Arrangement With the War Office; beautifully printed on the Best English Art Paper.'

The Great Push, in the form of IMAGES of WAR, helps capture the propaganda thrust of the times and presents once more the illustrations of those bewildering days along with an ID number for easy reference.

When British officers sailed to France in 1914 and 1915, they took their cameras, with their photos appearing in newspapers and magazines. The UK War Office decided it had to be stopped - far too much information presented on a plate to the enemy. Only official cameramen would be allowed to take photos -- a decision co-inciding with the 1916 Battle of the Somme.