ALL CANADA IN THE HANDS OF THE BRITISH: General Jeffery Amherst and the 1760 Campaign to Conquer New France 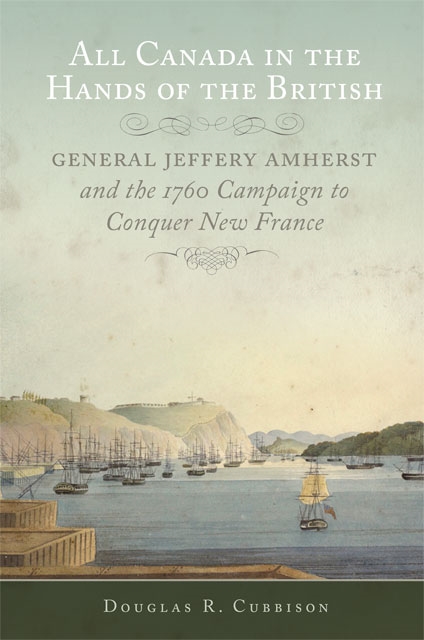 The full story of the successful sieges of Montreal that ended France's control of Canada. Includes 12 b&w illustrations, two figures, and three maps.

In 1760, General Jeffery Amherst led the British campaign that captured Montreal and began the end of French colonial rule in North America. All Canada in the Hands of the British is a detailed account of Amherst's successful military strategy and soldiers' experiences on both sides.

Newly promoted general Jeffery Amherst took command of British forces in North America in 1759 and soon secured victories at Fort Duquesne, Louisbourg, Quebec, Fort Ticonderoga, and Niagara. In 1760 William Pitt, head of the British government, commanded Amherst to eliminate French rule in Canada. During the ensuing campaign, Amherst confronted French resurgence at Quebec and mounted sieges at Isle aux Noix and Fort Levis, both of which were made difficult by French strategic placements on nearby islands. As historian Douglas R. Cubbison demonstrates, however, Amherst was well before his time in strategy and tactics, and his forces crushed French resistance.

Cubbison examines the three principal columns that Amherst's army comprised, only one of which was under his direct command. Cubbison argues that Amherst's success against the French relied on his employment of command, control, communications, and intelligence; and also shows how well Brigadier General James Murray's use of what is today called population-centric counterinsurgency corresponded with Amherst's strategic oversight and victory.

Using archival materials, archaeological evidence, and the firsthand accounts of junior provincial soldiers, Cubbison takes us from the eighteenth-century antagonisms between the British and French in the New World through the Seven Years' War, to the final siege and its historic significance for colonial Canada. In one of the most decisive victories of the Seven Years' War, Amherst was able, after a mere four weeks, to claim all of Canada. All Canada in the Hands of the British will change how military historians and enthusiasts understand the nature of British colonial battle strategy.