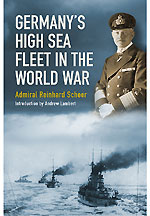 Anglo-German naval rivalry before 1914 had been expected to culminate in a cataclysmic fleet action in the North Sea once war was declared, a battle upon which the outcome of the war would depend: yet the two fleets met only once, at Jutland in 1916, and the battle was far from conclusive. 1 portrait and 28 plans.

In his own account of the war in the North Sea, first published in 1920, Admiral Scheer, the German commander at Jutland, gives his own explanation for the failure of either fleet to achieve the decisive victory expected of it, particularly the failure of his own operation plans that resulted in the battle of Jutland.

This book is an invaluable account of one of the most important theaters of the First World War, written by one of its most senior commanders.