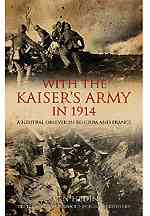 In 1914 Swedish professor, writer, illustrator and adventurer Sven Hedin was granted a car and escort and given a comprehensive tour of the German Armies fighting in Belgium and France during September and October 1914. Hedin was given unfettered access to German armies and leadership. The resulting book, With the German Armies in the West, was quickly finished and published, originally in Swedish, in 1914 then swiftly translated and printed in early 1915 by John Lane of The Bodley Head Press, London, at a time when the events described in the book were still fresh.

During his battlefront tour, Hedin took the opportunity to roam around the Army's rear areas and to visit the frontline trench network. In the process he conducted many interviews, ranging from ordinary German privates to the most senior commanders and also with British and French POWs. He was an artist of great skill and was allowed to sketch many scenes depicting German infantry, cavalry, logistics and artillery batteries. He also documented the condition of post-August 1914 Belgium and described the situation in a very different light to the febrile tones of most neutral sources.

This invaluable study of the Kaiser's Army in the early stages of the First World War is a great addition to the literature of the Great War providing a rare glimpse into the German Army of 1914.