THE HORNS OF THE BEAST: The Swakop River Campaign and World War I in South-West Africa 1914-15 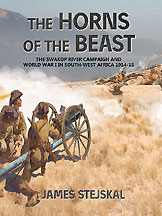 In December of 1914, veteran Boer commander General Louis Botha landed his forces on the coast of German South West Africa to finish off the colony's Schutztruppe defenders. In August, the South Africans had started off badly with a disastrous battle at Sandfontein and an internal rebellion that could have torn the Union of South Africa apart. Botha's campaign would eventually lead to victory, but it would not be easy.

Overshadowed and largely forgotten by the battles in Europe, this was one of the more distant and now almost forgotten episodes of World War I. But from August 1914 to July 1915, a small German force of 4,000 faced nearly 75,000 Allied troops of the Union of South Africa, Britain, and colonial Rhodesia in a fight that was pivotal in the history of southern Africa. This loss on the battlefield would cost Germany her most prized African possession and prove to be an important milestone in the history of the country that would eventually become Namibia.

Britain was so concerned about the threat the German protectorate of South West Africa posed to the Empire that it requested its dominion, the Union of South Africa, occupy the territory's ports and destroy its powerful wireless stations. South African leaders were eager to take on this 'urgent Imperial service' to expand their own territory. When the Germans capitulated nearly a year later, it was the first Allied victory of the war and a rallying point for the United Kingdom. It was a terrible place to fight a war. Invading troops wondered why anyone would want to live in the place, let alone fight over it. Vast deserts barred easy entry to the country; the bones of animals and humans scattered across the surface attested to their lethal nature.

The South Africans had to feed and water over 100,000 horses and oxen where little fodder existed and after the Germans had sabotaged many of the water points. Meanwhile, the Germans were looking over their shoulders as the native peoples they had long mistreated tried to settle old scores through ambushes and sniping.

Using primary sources, on the ground research, and accurate maps and charts of the battles, the author sheds new light on the operations of the South African Army in its first foreign war and the Schutztruppe defense of German South West Africa. The book also demonstrates the terrible cost of miscalculations by politicians and military leaders on both sides.