THE AMERICAN ARMY: And the First World War 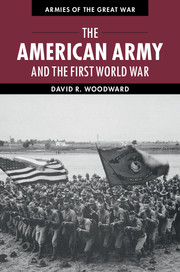 This is a definitive history of the American army's role and performance during the First World War. Drawing from a rich pool of archival sources, David Woodward sheds new light on key themes such as the mobilization of US forces, the interdependence of military diplomacy, coalition war-making, the combat effectiveness of the AEF and the leadership of its commander John J. Pershing.

In spite of a flawed combat doctrine, logistical breakdowns, and American industry's failure to provide modern weaponry, the Doughboys were nonetheless able to wage a costly battle at Meuse-Argonne and play a decisive role in ending the war. The book gives voice to the common soldier through first-hand war diaries, letters, and memoirs, allowing us to re-imagine their first encounters with regimented military life, their transport across the sub-infested Atlantic to Europe, and their experiences both in and behind the trenches.